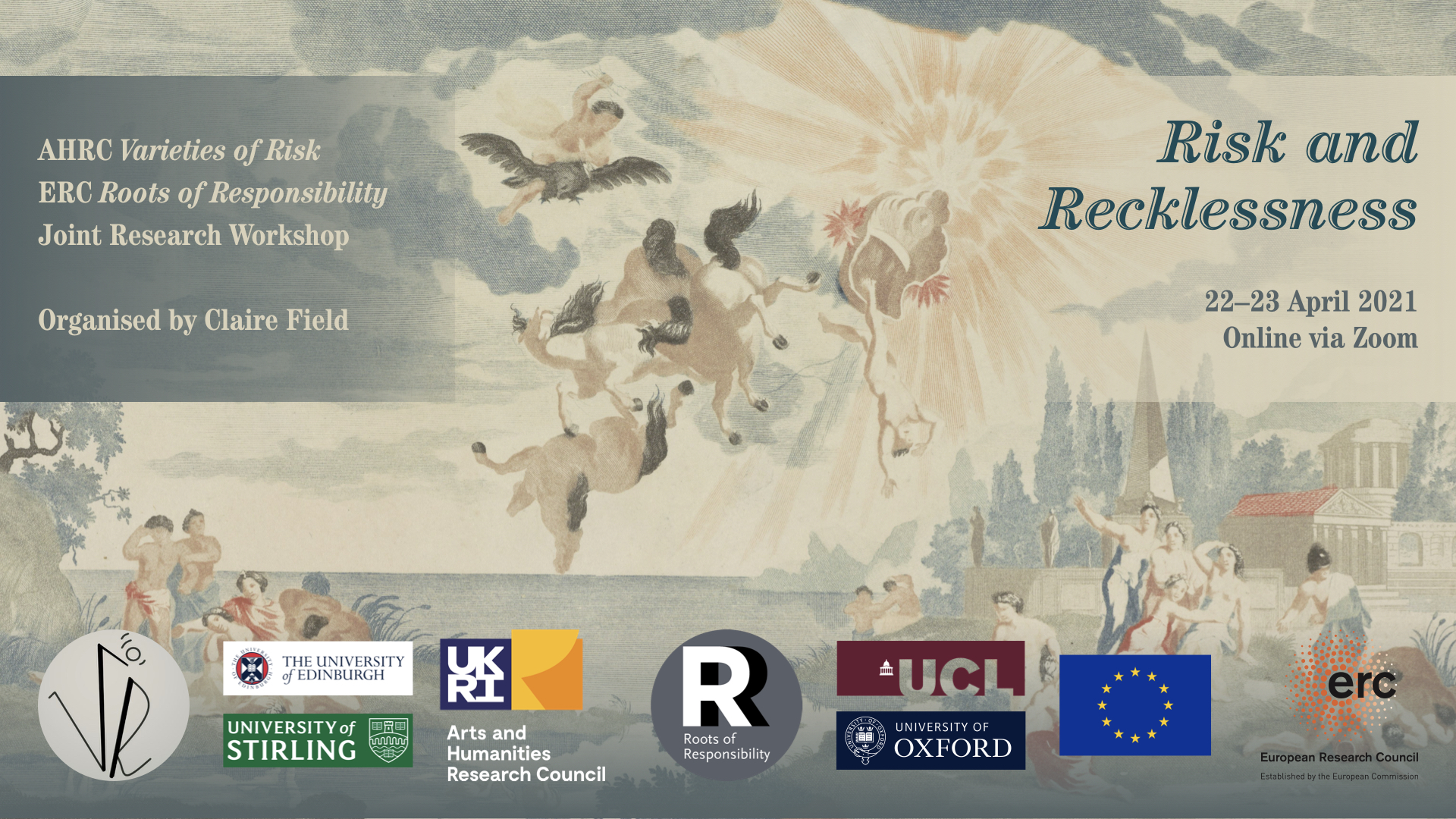 [Update: 12 April 2021] The schedule has been updated, with the titles and abstracts of the presentations.

ERC Roots of Responsibility and AHRC Varieties of Risk will jointly sponsor a workshop on Risk and Recklessness, to be held on 22–23 April 2021, online via Zoom. This workshop is organised by Claire Field, an associate research fellow of RoR at UCL and  postdoctoral research fellow for VoR at Edinburgh/Stirling.

When is a risk reckless? What does recklessness involve, and what influences our judgements of when a risk is recklessness? These are important questions for decision-makers, prosecutors, and increasingly the rest of us in navigating our everyday lives. Answering them requires understanding the nature of risk, as well as the nature of recklessness. This workshop aims to make progress on that by bringing together philosophers and legal theorists working on these topics.

Schedule (all times in UK time)

Note: Alexander Greenberg's and Philip Ebert's sessions are talks followed by Q & A. The other four sessions are discussions of read-in-advance drafts, following a brief introduction by the presenter and a brief response by a designated respondent. The drafts to be read in advance are made available to all registered participants.

Alexander Greenberg (UCL) - Culpability, Consciousness, and Carrying on Regardless

The difference between recklessness and negligence as mens rea concepts in criminal law marks the edge of criminal liability for many headline offences. Recklessness as to actus reus elements is sufficient mens rea for offences such as assault, criminal damage, handling stolen goods, certain forms of manslaughter, among others, while negligence is sufficient mens rea for only a few headline offences, for examples, dangerous driving and gross negligence manslaughter. The standard view, echoing the American Law Institute’s Model Penal Code, sees recklessness as advertent unjustified risk-creation and negligence as inadvertent unjustified risk-creation. On this view, advertence or awareness of the relevant risk marks the difference between the two legal concepts. This standard view can be a purely descriptive position, but it also features predominantly in thinking about what the legal concepts ought to be or how to make best sense of them. The standard view has come under renewed pressure recently, notably – in the context of broader analyses – by Seana Shiffrin (‘The Moral Neglect of Negligence’) and Antony Duff (‘Two Models of Criminal Fault’). These authors question whether awareness of risk can bear the substantial normative difference-making role assigned to it under the standard view. Duff is concerned with the legal concepts and draws on moral intuitions to indicate what the legal concepts ought to be. Shiffrin’s focus is the moral concept of negligence, not the legal concept, but her insights bear on the analysis of the legal concepts. Among other things, the authors challenge the standard view by identifying inadvertent unjustified risk-taking as plausibly residing in the realm of recklessness when recklessness is the more highly culpable attribution than negligence (though I note Shiffrin questions that hierarchy as well). As rivals to the standard view, Shiffrin suggests the actor’s motivations as distinguishing recklessness from negligence. Duff proposes that attention to the structure of the actor’s practical reasoning, ie, their attitudes to risk as manifested in their action, as revealing the difference between mens rea grades of culpability. If we take the two main aspects of recklessness mens rea in law to be (1) unjustified risk and (2) an actor’s awareness of it, then Duff and Shiffrin both push the emphasis from (2) to (1) with the task then to unpack (1). This paper explores Shiffrin’s and Duff’s challenges to the standard view, pursuing what the difference between recklessness and negligence ought to be in criminal law by pressing for more specification as to what aspect of the actor’s motivations or their practical reasoning is pivotal. This involves expanding on Shiffrin’s analysis since she deliberately leaves unspecified how exactly an actor’s motivations matter, and analysing Duff’s indications on how exactly an evaluation of an actor’s practical reasoning leads to recklessness or negligence attribution. Some methodological considerations along the way: For recklessness and negligence as legal concepts, the distinguishing element or feature should mark a categorical distinction between the two concepts rather than a scalar difference (scalar in the sense of continuous spectrum where difference is a matter of degree). There should be no cases of overlapping recklessness and negligence attribution; the distinguishing feature should be ever-present in one category and never present in the other category. Of course, there will be borderline cases that perhaps could reasonably be assessed as either recklessness or negligence, but it should be unavailable as a conclusion in law that a specific, individuated act (as the criminal law sees it) displays both recklessness and negligence at the same time in respect of a single criminal offence.

Martin Smith - Rights and the Ethics of Risk Imposition

My concern in this paper is with a series of problems that are known to beset rights-based approaches to the ethics of risk imposition. Existing attempts to deal with these problems tend to proceed in one of two ways; either by fine-tuning the precise nature of the relevant rights, or by making various adjustments to the broader rights-framework. The strategy that I will pursue, while not altogether distinct from these approaches, shifts the focus onto the nature of risk, and to the different ways in which we can conceptualise the risk to which one individual is subjected by the actions of another.

Alexander Greenberg - Culpability, Consciousness, and Carrying on Regardless

When a criminal offence requires that a defendant knows, believes, or is aware of something, should we require that knowledge, belief, or awareness to be conscious? And if we should, in what sense of ‘conscious’? With regards to some senses of ‘conscious’, the answer is clearly ‘no’. But I will argue that in an ‘epistemic’ sense of consciousness, we should require knowledge, belief, and awareness to be conscious in the criminal law. Showing this, however, involves investigating a strangely undertheorized question in philosophy of action: the question of what it is to act in spite of a fact.

Economics has traditionally been opposed to paternalism. However, the findings of behavioural economics have made popular one kind of paternalism that appears to be more innocuous: The kind of paternalism that respects an agent’s ends, or her non-instrumental, intrinsic valuations, and merely helps her purse them effectively. This paper discusses one prominent and initially promising way to inform means paternalist policies addressed at agents who violate expected utility theory (EUT), namely what I call ‘CPT debiasing’. It assumes the descriptive adequacy of cumulative prospect theory (CPT), which allows us to identify a utility function for the target agent. This is often thought of as providing us with a measure of her ends. We then plug this utility function into an expected utility calculation in order to determine a rational way for her to pursue those ends, which the means paternalist then imposes on her. This paper argues that CPT debiasing should be opposed on general anti-paternalist grounds, even if we grant the normative authority of EUT, the descriptive adequacy of CPT, and the idea that means paternalism is at least sometimes immune to general anti-paternalist concerns. First, this is because there are reasons to doubt that the utility function measured within a CPT framework provides us with a measure that isolates the agent’s non-instrumental values, or her ends. Second, even if it does, the resulting means paternalism is a problematic type of means paternalism that should be ruled out by the same considerations that motivate economists’ opposition to ordinary paternalism.

Suppose Ann is morally conscientious. She is trying to work out whether Beth holds a right against her. She then begins to wonder whether it is because of, first, her beliefs about the world which would mean that Beth holds a right against her. Or, second, because of the best available evidence which would mean Beth holds a right against her. Or, third, the facts—how things actually are—which would mean Beth holds a right against her. All of this is to say that Ann wonders whether the rights that others hold against her and, correlatively, the directed duties she is under are determined by her beliefs, the evidence, or the facts. While there is a large literature on whether our moral requirements depend on agents’ beliefs, the evidence available to them, or the facts, there has been comparably less attention paid to which perspective rights, and the correlative directed duties that others are under, depend on. This is a shame as there are normative upshots specific to rights and directed duties, which do not bear on requirements. This paper argues that rights depend on the facts. In section 2, I distinguish further between beliefs, evidence, and facts. In section 3 and 4, I argue against what I call the Belief- and Evidence-Relative Views. Among other things, both views counterintuitively undergenerates rights when others’ beliefs or the evidence available to them is poor. In section 5, I consider two objections to what I call the Fact-Relative View—first, that there are no fact-relative requirements for fact-relative rights to interact with and, second, that even if there are such requirements, they are not the sorts of requirements that really matter.

In this paper, we investigate perceived danger and recklessness judgements (N = 2060) about risk-taking in different outdoor sports ranging from mundane activities to more adventurous activities and discuss our findings within the wider philosophical debate about the notion of transformative experience which could help to explain variations in risk judgements, as well as recent philosophical discussion about non-probabilistic notions of risk and danger, such as the modal and the normic account of risk & danger (Williamson, 2007; Pritchard, 2016; and Ebert, Smith, & Durbach, 2020). The main findings of our study are that substantial differences in fatality rate or in factors with direct links to fatality rates, such as expertise, have far less of an effect on danger, recklessness, and insurance judgements than the kind of sport that is being pursued. Other contextual factors primarily influence recklessness rather than risk judgments, and the most important of these relate to whether there are external parties such as dependants or charity organisations that might come to harm or benefit as a result of the sports participant's activity.  These results have philosophical consequences: significant differences in danger and recklessness judgements, despite identical fatality rate, provide some initial support for non-probabilistic conceptions of risk and can thus inform a thriving philosophical debate about different conceptions of risk. Moreover, divergences between danger and recklessness judgement in our survey suggest that the latter is a more complex context-sensitive notion with a distinct moral dimension.

Participating in the workshop

We encourage colleagues and especially postgraduate students to attend. Please spread the word. All are welcome, but registration is essential: if you are interested in attending, please register from the following link:

« REGISTER TO ATTEND THE WORKSHOP »

Enquiries about the workshop can be submitted via the message form on this website.