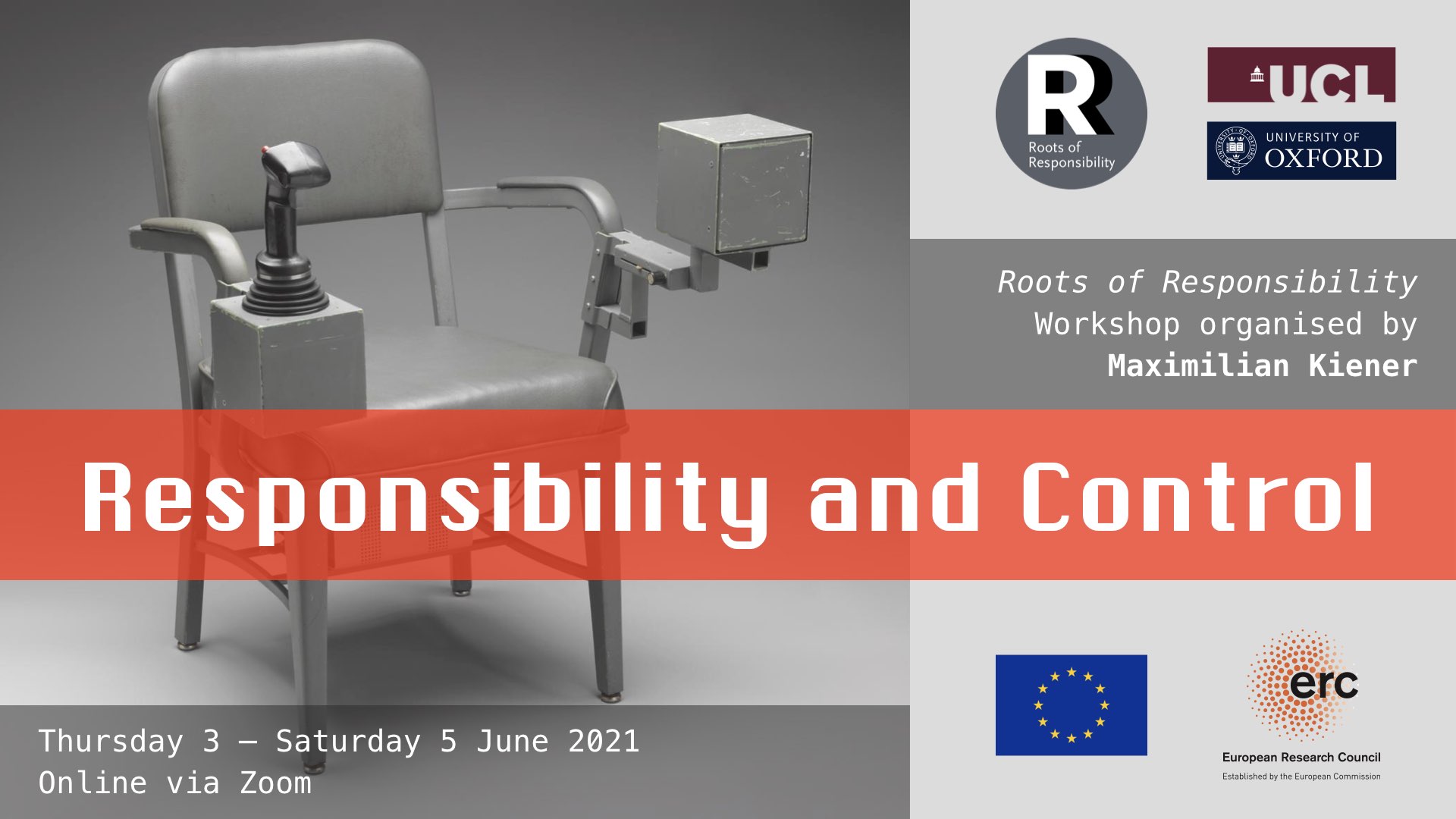 We hold people responsible for their beliefs, emotions, or character traits without fully understanding how they control these things. Moreover, blame does not always reflect the control people have over their conduct. For instance, suppose someone knowingly violates COVID-19 travel restrictions and causes an outbreak of infections in a care home. It would be normal to blame that person severely for the outbreak. But suppose another person did the same thing but was lucky: his reckless behaviour did not have any adverse consequences. Our reaction to this person’s conduct may be considerably milder, despite the fact that he had the same degree of control as the unlucky person. Finally, in more recent debates, scholars have argued that certain types of artificial intelligence do not give us sufficient control over them anymore, e.g. because they operate too fast to be monitored in real time. But if that is correct, would the use of AI then also diminish or even exclude human moral responsibility, potentially leaving us with a responsibility gap?

By examining these and other pressing questions, this workshop aims to elucidate the relation between moral responsibility, blame, and control.

Schedule (all times in UK time)

[In place of an abstract, here is an excerpt from the introductory section:]

… You’re autonomous in the sense of non-alienation vis-à-vis an action or a decision that concerns you to the extent that the relevant matter is determined by your values, or your deep commitments. You’re autonomous in the sense of sovereignty if you have the last word regarding the relevant matter, if it’s a matter of your choice, of your decision. … what is the relation between these two autonomy-values? The two values seem to stand in correlation … But there seems to be more – the two autonomy values seem more closely related than merely by way of correlation or contingent causal relations. A plausible hypothesis is that one of them is somehow more basic, so that the other is of value in virtue of the more basic one being of value.

In this paper I pursue this plausible hypothesis. I argue that the value of sovereignty is at the end of the day grounded in the value of non-alienation. …

It has long been thought that control is necessary for moral responsibility. Call this the control condition. Given its pride of place in the free will debate, “control” has almost always been taken to be shorthand for voluntary control, an exercise of choice or will. Over the last few decades, however, many have been arguing for including a range of attitudes for which we seem to be responsible that, if controlled at all, must be controlled via a very different mechanism, namely, evaluative judgment. Call this second type of control evaluative control. In this paper I will present and discuss in detail an additional agential stance—reasonish regard—for which we treat one another as responsible, but that is ungoverned by either of the first two types of control. If we want to require a control condition for responsibility, then, we will need to introduce and include a third type of control, what I call empathic control.

Antony Duff - How Strict Can Moral Responsibility Be?

[In place of an abstract, here is an excerpt from the introductory section and the concluding section:]

My concern here is with strict responsibility, rather than with strict liability. … Moral liability—liability to be blamed or to be criticised as a wrongdoer—might be constructive … but cannot be strict: I am blameworthy for causing harm only if I was at fault in causing it. However, it is sometimes argued that moral responsibility, understood as a matter of answerability or accountability, is strict. …

Karen Yeung & Timothy Endicott - The Death of Law? Computationally Personalised Norms and the Rule of Law

The emergent power of big data analytics makes it possible to replace impersonal general legal rules with personalised, particular norms. We consider arguments made by legal scholars who believe that such a move would be generally beneficial, replacing crude, general laws with more efficiently targeted ways of meeting public policy goals and satisfying personal preferences. Those proposals pose a radical, new challenge to the rule of law. Data-driven legal personalisation offers some benefits that are worth pursuing, but we argue that the benefits can only legitimately be pursued in ways that are consistent with the agency that the state ought to accord to individuals, and the agency that the state ought to accord to itself. These two principles –the principle of private agency and the principle of public agency– are prerequisites for the rule of law. Each is incompatible with unrestrained computational personalisation of law.

[In place of an abstract, here is an excerpt from the introductory section:]

Bernard Williams described the case of a ‘lorry driver who, through no fault of his, runs over a child’ … once we accept [the orthodox reading] of Williams’s case (alongside a widely accepted Apology Principle), we face the following individually plausible, yet jointly inconsistent claims: (1) The faultless driver is not morally responsible for the child’s death; (2) Apology Principle: One ought to apologise (i.e. give a genuine apology) for something only if one is morally responsible for it; (3) The driver ought to give a genuine apology for the child’s death.

In this paper, I will present this inconsistent triad as a strong, yet hitherto neglected challenge to our thinking about moral responsibility. I will then discuss two different solutions. The first comes from David Enoch’s idea of taking responsibility as a normative power and the second is reconstructed from Antony Duff’s idea of strict moral answerability. I will compare both views and argue for the latter. In so doing, this paper aims to make three novel contributions: (i) drawing attention to a hitherto unnoticed challenge, (ii) generating support for two neglected ideas, i.e. taking responsibility as a normative power and strict moral answerability, and (iii) presenting a sustained defence of strict moral answerability, which has so far been supported, if at all, with reference to intuitions only (Husak, 2010, p. 118).

There are many different accounts of apology, but there seems to wide agreement that an admission of culpability is a necessary component of a sincere genuine apology. However, we sometimes apologize for harms that are not clearly under our control, and in such cases we cannot admit culpability. Thus on the standard account, this sort of apology cannot be a genuine apology. In this paper I argue that there can be genuine apologies for things that are not under the agent’s control. I nonetheless offer a unified account of what apology is.

First, I set aside pro forma apologies. Pro forma apologies are part of our politeness norms. They are a way of acknowledging harm, but do not acknowledge responsibility at all, and are compatible with excuses and justifications. By contrast, genuine apologies are not compatible with excuses or justifications. This is why it may seem as though admission of culpability is a necessary condition for a genuine apology, and apologies for things that are out of our control must be pro forma apologies. I deny this: I argue for a unified account of genuine apologies, according to which a genuine apology is an offer to accept blame. Blame can be articulate, involving a judgment about culpability, or non-articulate, in that it is emotional, and points to another agent, but does not commit the blamer to a judgment of culpability. Thus accepting blame can make sense even without admitting culpability.

Participating in the workshop

We encourage colleagues and especially postgraduate students to attend. Please spread the word. All are welcome, but registration is essential: if you are interested in attending, please register from the following link:

« REGISTER TO ATTEND THE WORKSHOP »

A PDF version of the poster for the event is available here.

Enquiries about the workshop can be submitted via the message form on this website.